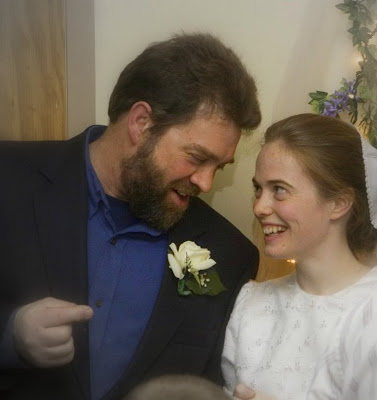 It's Father's Day in Thailand. I cried a year ago when our church at CMCC had their Father's Day service. The little girls sang a song for their dads. Pii Noom dedicated a song to his dad, Pastor Kiat. And I cried, and cried, and cried. I was suddenly so hopelessly homesick and missing my own dad.
I don't know what I'll do this year. I'm not sure if they will celebrate the dads this year like they did last year. Maybe I'll cry, maybe not. But right now, I'm going to celebrate my own dad.
People who don't know my dad well might say he's a quiet sort of person. I never really thought of my dad that way. He always made himself known when he wished it that way. Here are some random memories of my dad.
Dad,
Being over here has taught me even more how blessed I've been to be your daughter. Here we're among young Christians who don't know what a Christian family looks like. It seems like the men are not really the leaders that they need to be. But you were there, protected me and took care of me all the way to the walk down the wedding aisle. Thanks for being a man of truth. Thanks for the safe home life I grew up in. Thanks for being there. Thanks too for standing behind us and being tuned in with our lives here too. I love you, and miss you, and am so thankful for you.
Love, Lisl
Posted by Lisl at 7:46 PM