About that picture a day thing…

It’s kind of off. I take a picture now and then. Life is busy and I didn’t have a computer readily available for a bit there, and so…blogging fell to the wayside and pictures too. But now I have a computer again and also, I have a new phone, one with the ability to take pictures. So I take pictures and put them on Facebook. I still have to figure out how to put them on my computer from my phone but so far I haven’t looked into that. So if  you’re friends with me on Facebook, lucky you. If not, hang on a bit and I’ll get them on here some day, I hope. And I do hope to be better again about posting pictures regularly.
However, here are just a couple that I had on the camera. These first two were taken at staff retreat this year. There is a new coffee shop at Lanna Resort and one afternoon Dru and I took the kids down and took advantage of it. There is this sweet little stream that runs by and it’s been cleaned and made play friendly. So the children played in that. 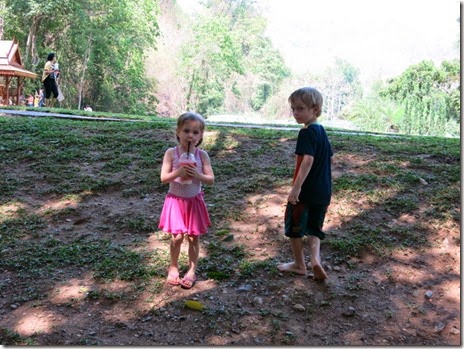 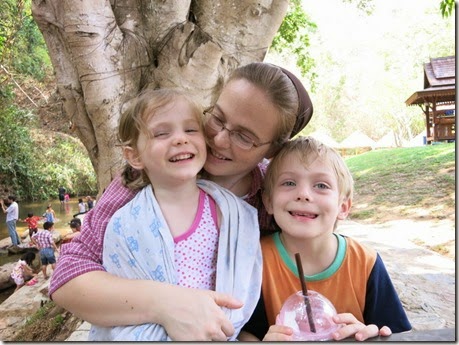 Then there are these home pictures. The other day I switched out the toys for the children. They weren’t playing with toys much and I think they were getting bored. So I got out the bins and in with the old and out with the “new.” They played very happily for most of the day. Should have done it sooner. Today I even put three of Havilah’s dollies away as well. They were laying around and not being played with anyway. Now I have toys laying out all over all the time, but at least they’re being played with. 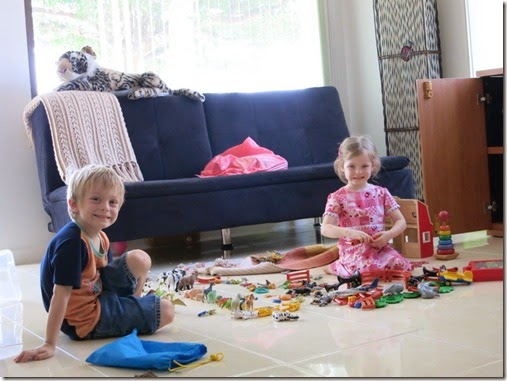 Rennie has decided to enter the other two children’s play. This involves bothering them by scooting across the room on his belly and sucking on the toys they were trying to play with. They complain but secretly they’re tickled pink that he’s getting around. Especially Jube. Havilah had a bad dream about it the other night though. She was sick so I had her in my room for the night. She, in her sleep, said very distinctly, “Mommy, Rennie’s bugging me.” I got out of bed and said, “What?” and she said, “Rennie.” I’m pretty sure I know what she was dreaming about. 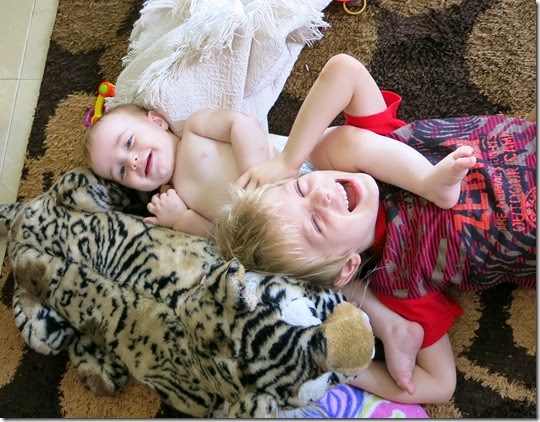 I’ve had to tell Jube that if he puts his hair in close proximity to Rennie’s little hands, then his hair will be pulled. Here they’re having a good time. Well, Rennie is anyway.
Here are a few random things to catch you up on our lives:
1. Bunny Foo-Foo has scratched several too many times. At this point we are seeking to relocate her to a different home. She’s not really a bad rabbit, but the children aren’t quite able to handle her strong little hind legs. I don’t know maybe she is a bad rabbit? Mostly I think she just gets tired of being picked up by them. Jube thinks he wants a turtle instead.
2. Hannah is no longer with us. We miss her. Jube cried a couple times the first couple of days. Havilah insists to us that Hannah is coming back. At the same time getting back into the groove of homemaking on my own has been good for me. It’s probably good for all of us. However, we’ll take any aunties who want to come see us, in in a heart beat. Uncles too, for that matter.
3. Staff Retreat was wonderful, as usual. I usually spend the whole month before it planning and dreaming of what I will take with me or not and all that. I look forward to it intensely. Like a little kid. So my kids do too.
4. Here’s a thought I had while at Staff Retreat and so far I am still trying to figure out how to make it practical: What if all that time we “don’t have” to have quiet time because we’re mothers and busy, is supposed to be spent worshipping and what have you with our children? Maybe instead of bemoaning the fact that we’re not having time to spend in the Word and prayer every day, we’re supposed to do it with the kids, rather than away from them? I’m pretty sure I still need quiet time with out them. But I’m also pretty sure that there are plenty of times that I’ve stumbled upon something to meditate on when I’m reading Bible stories to the kids, or just talking to them about Jesus stuff. Two examples: The other day Havilah asked if God had a house. I said yes, I think so. And then I thought DUH! Heaven is God’s home or house, if you will. That’s what going to heaven is all about, going to God’s house. Spending forever there with Him. The other example. I read the whole book of Jonah to the children the other day. We’re memorizing it but I went ahead and read the whole story to them beyond as far as we had memorized. I found this verse, “Those who cling to worthless idols forsake faithful love.” Now tell me, who was he saying had forsook faithful love? Wasn’t it himself? This was his prayer in the belly of the fish. And then he finishes his repentance prayer in verse nine by saying “but as for me, I will sacrifice to You with a voice of thanksgiving, I will fulfill what I have vowed. Salvation is from the LORD!” (HCSB) So I’ve been pondering that around in my head.
And now I’m going to bed. Goodnight, have a good day, all you people on the other side of the world.
Posted by Lisl at 11:17 PM 3 comments: