My Men’s Birthdays and More…

I know it’s been a while since I’ve blogged. Those of you who really care about pictures have been keeping up with Frank’s blog. I’m glad you’re enjoying them. I hope that you all will go home and take pictures of your lives for us to see now. And blog them. Sometimes I think people forget that in all of their caring for us, we want to know about them too.

Life has been crazy around here the last—oh, about three weeks. I’ve been so thankful to have Francis here “for such a time as this,” only I wish she could have missed out on some of the drama that surrounded us these last couple of weeks. Drama I’m not even going to go into other than to say that it’s better now and God answered many tears and prayers and the world isn’t going to stop going ‘round, even though in the middle of it, it did feel really awful at times. Actually, looking it all back over I have to say, God IS good and will continue to be.

And after we got through all of that, we felt like we were thrown another curve ball, which I’m not going to tell you about either. But last night Dru told me that he came to a decision that he felt peace about, and when the man does that, then things feel better cause then you at least have a plan. A man without a plan has got to be one of the world’s most helpless feelings.

But in all of this, my life is still pressed down and shaken over with good and happy things. Like my family.  Frank snapped the following two pictures of us when we went to the Mall. The children we left with Mae Wahn. 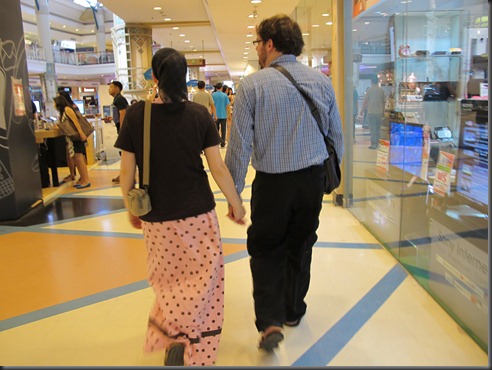 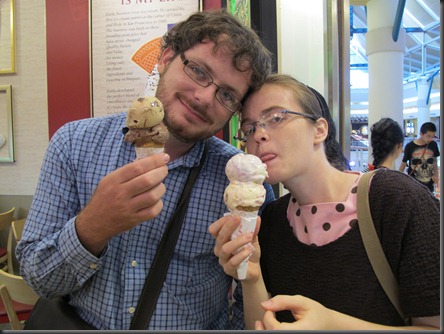 For Jube’s birthday we headed to the park to feed the birds. Jube was so excited and amazed that he didn’t’ even eat his cupcake. I couldn’t even get him to pose properly. 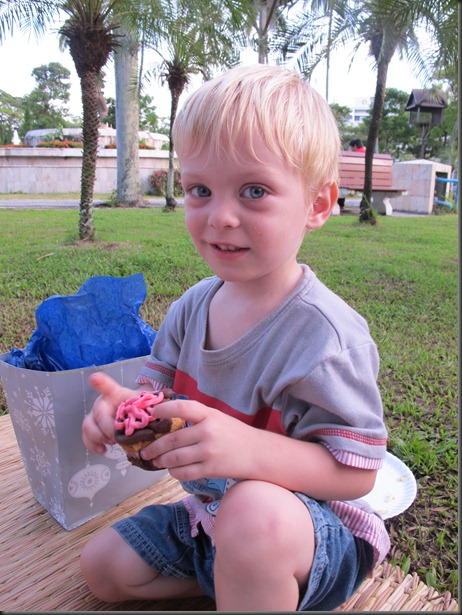 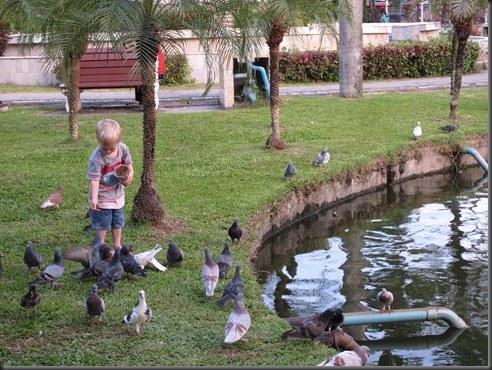 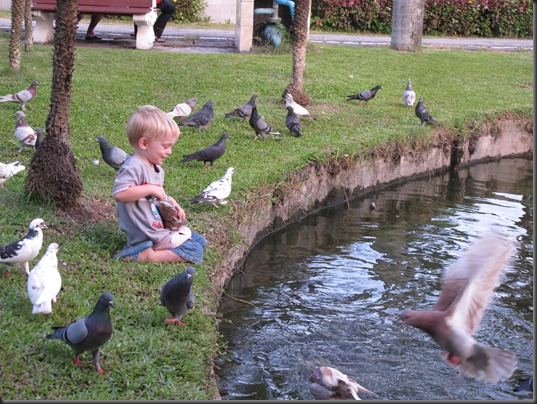 Sitting near the edge of the water like this made it easy to feed both the fish and the birds. Notice the water swirling. 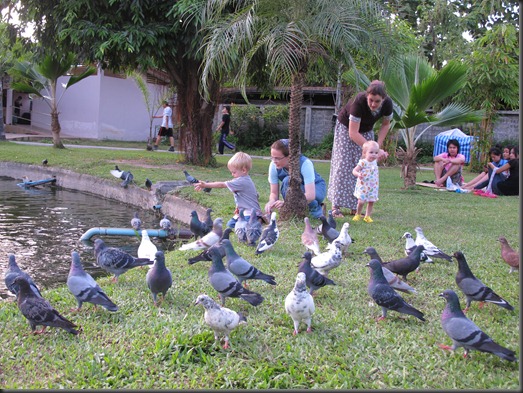 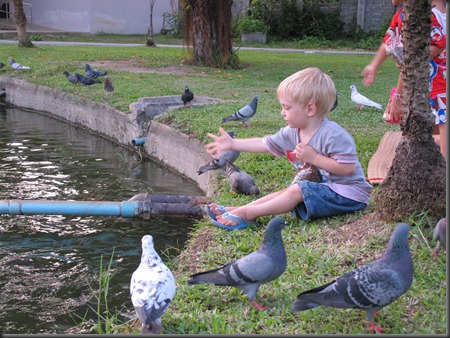 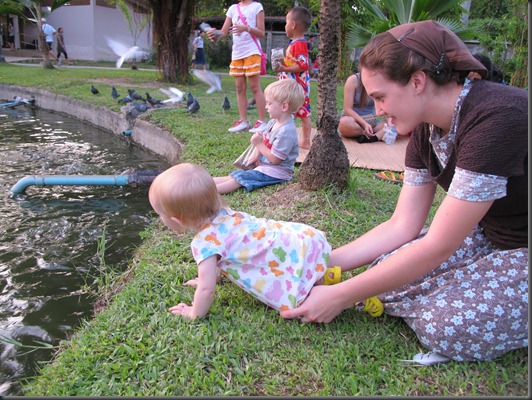 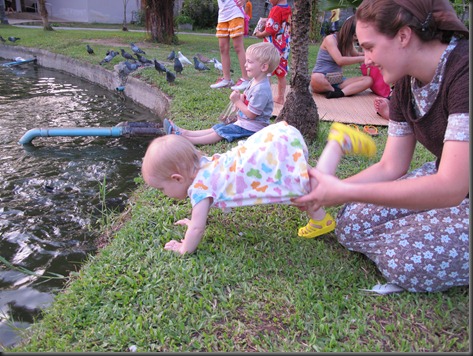 Havilah was determined to go swimming. She was trying to leap into the pond with great bounds. Stinker. 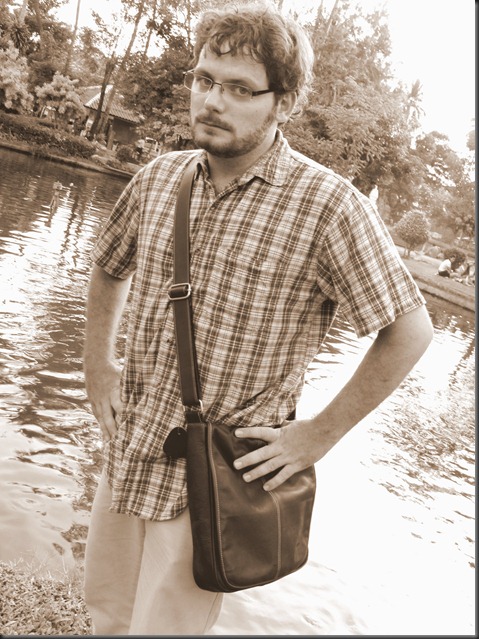 This is my Dru man with his new book bag. We’re kind of happy with it because its leather, the right style and the price wasn’t too bad. After going through one bag in just one semester, we decided we might as well get him one that would last. Any of you who know Dru know that he can be dreadfully hard on things. It was kind of a struggle with the conscience to go ahead with this—but his wife kind of convinced him to go for it, so he did.

Finding it was a bit of a hassle but it made for a long, latish date (happy thing). Frank had the children tucked into bed by the time we got home. But then both children were sick and Jube had to spend some time in a steam tent, and Havilah didn’t want to sleep all night. So I didn’t get much sleep that night. 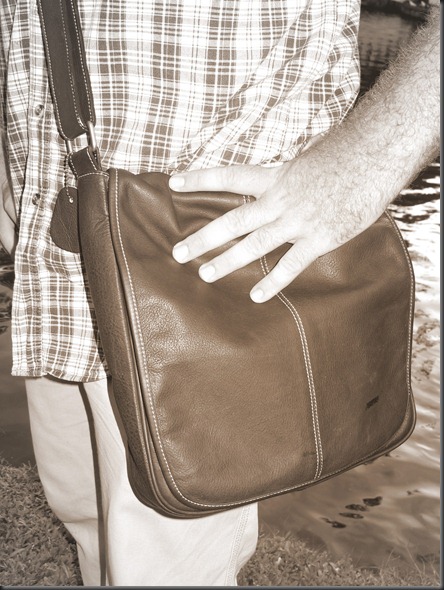 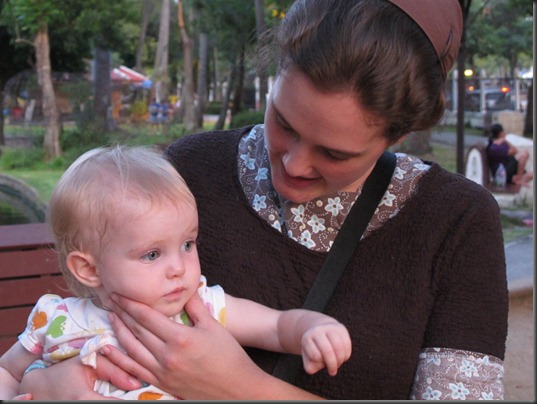 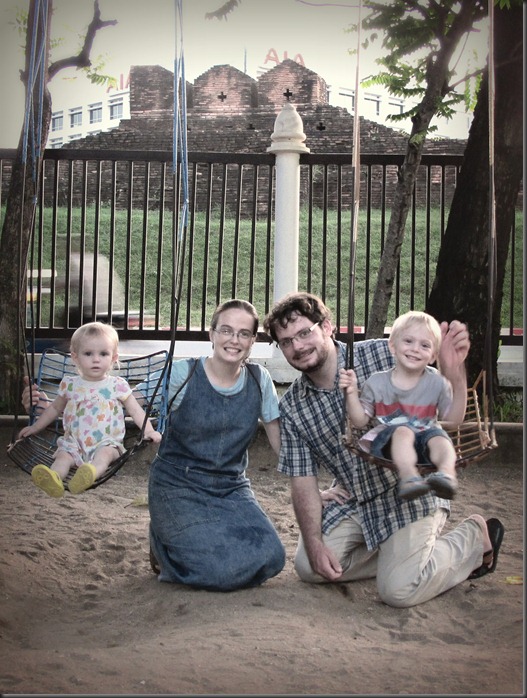 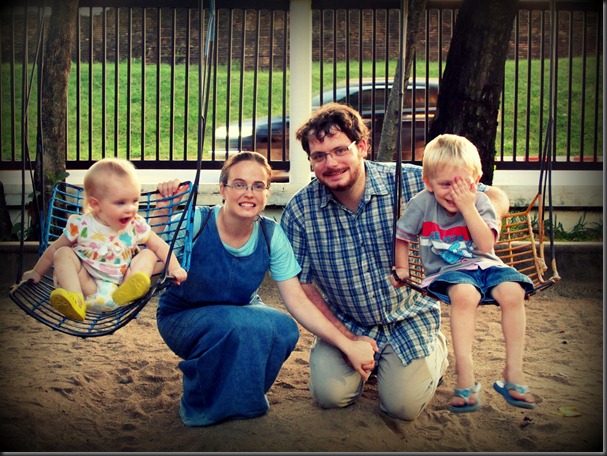 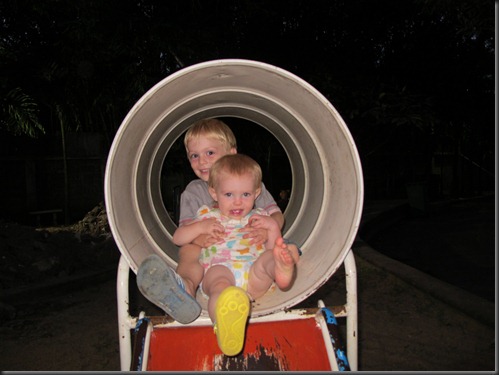 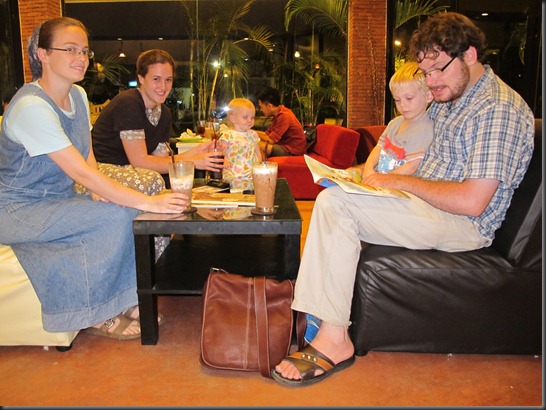 And then we went to the coffee shop and ordered too much but got most of it down anyway and laughed and talked and read Jube  a story , and chased Havilah around and had a good time while the dirty dishes waited at home. I made a conscious decision not to think about them and enjoy myself and my family. 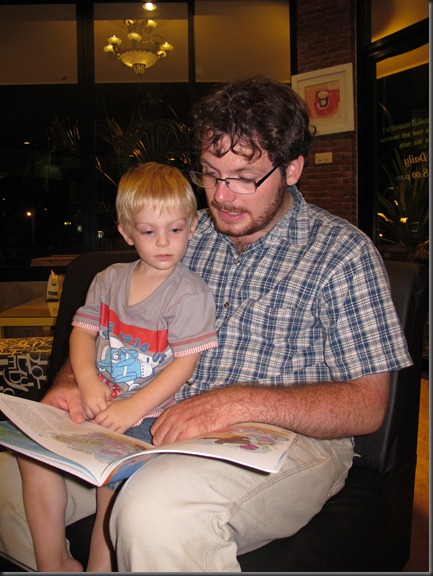 Jube with one of his new books. Jube got lots of presents from other people. Anticipating this and given the amount of toys he already has, we kept it really simple. We gave him two books and his bears from Marmee and Dru bought an app for Jube to play with on his computer. (Dru’s computer that is. Dru and Jube like to play games on the tablet but Jube is still a bit young for angry birds.) 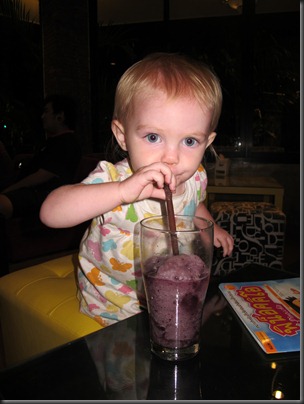 This little girl got silly and ran around and was cute. 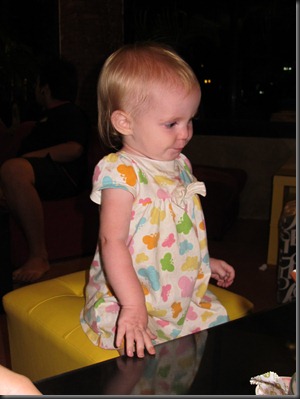 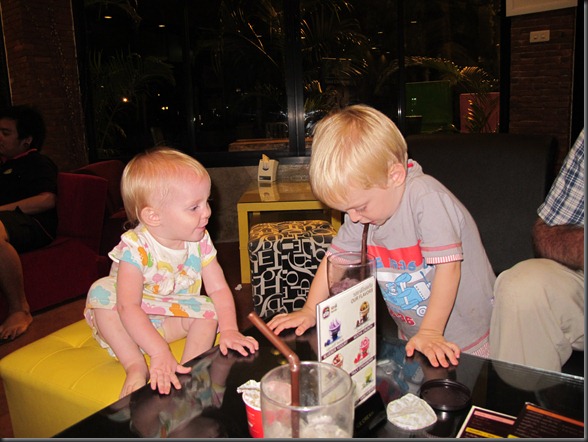 Please excuse any typos until my husband finds them and fixes them. I’m going to go get my day on the road. I have to study for my Thai class. There are more pictures of the the birthday party we had at our house last night with Jube’s famous snowman cake that I made for him. He has insisted ever since Havilah’s birthday that he wanted a snowman cake…so I made one. It turned out okay if I must say so myself.

On a Rainy Morning

My washing machine was fixed and I got it back last evening. Lovely to have my clothes wrung out properly. Today’s agenda included mostly laundry but I’m loath to get started until the rain stops. Drying laundry, even if I am doing it inside with a fan on the wrack, is a near fruitless endeavor.

Yes, it is lovely to have Francis (a.k.a., Frank) here. It’s hard to believe it’s been over a week already since she arrived. So far we’ve done nothing exciting with her other than get stuck in the rain on our first Sunday to church because our car doesn’t like rain and has a tendency to get fussy when we take it out in the rain. But we forget about this quirk it has until we’re stuck in the rain…so it hasn’t gotten fixed. So Francis missed church the first Sunday all because of a car.

And here we are still struggling to pin down a Thai teacher. One teacher we really liked is a bit pricey and transportation is an issue. Dru was able to make contact with another teacher we were recommended (she wouldn’t answer her phone) only to have her say that she was really busy but has a friend who’d like to start teaching and are we interested? So that’s where we are this morning. Do I want to have a teacher who’s never taught Thai before as my teacher? The lack of experience on her part has its pros and cons. There is some advantage to having a teacher to whom I can bring my agenda and say, “This is what I want to learn this month,” rather than have her decide what we learn. This does require more work on my part, but done properly, it could be the most effective way of learning. But, do I even know what I need to learn? Sigh. So glad for Dru helping me through all of this.

Today we also need to go pick up Dru’s now repaired bicycle. Then Frank and I can ride around the neighborhood. She says she’s going to go on bike rides and that she’s not scared of dogs.

It’s time for me to go make breaky. Jube just came an asked for a muffin. Muffins are his preferred form of breakfast. So I shall go make some breakfast. And I don’t have anything else to say anyway. Life is just really normal around here…