My fight with beauty

Today I sat down on my rocking chair and picked up a Victoria magazine. A friend gave me a subscription the summer we were in Wisconsin, and the magazines came with me—although I think a couple of them may be floating about at Lance’s yet. For the first time in a while I have my brains back in my head. Maybe it’s because the sun is shining today and I’m not wrapped in so many layers that I can barely move about the house. So the kiddos and I did some house work, a little bit of school, and I sat down and picked up my magazine. 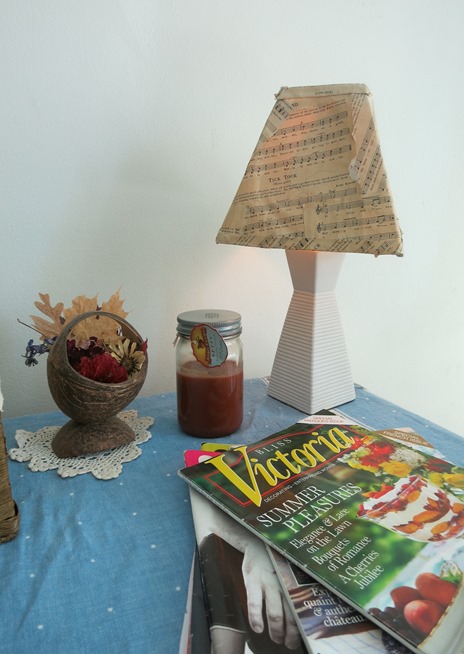 Something wakes up and breathes and shouts for joy at all of the eye candy on each page. The dainty dishes and vases, flower arrangements, linens, and food. I get inspired. I have a dream one day to do my own stamping onto linen—make my own designs. I realize that if I made it a priority, I could do that here and now. The supplies are available from the market anytime. Then I feel simultaneously guilty and trapped.

The guilty trapped feeling comes because of the country I live in. I know that there are Thai people who come into my home and are wowed by my “expensive decor.” I serve desserts on pretty plates…desserts that I have made from scratch—baked in my own oven. An oven is another luxury most Thai people do not have. We pay a bit more per month on our rent than some of our Thai friends do. I am supposed to be a missionary here, yet I am not willing to live in a house such as they do?

Little do they know that we foreigners struggle some puzzlement of our own about the way they live. Dru and I would never spend money on a large TV monitor. When we bought our first car, we were quite poor—yet we felt pressure, and not from our foreigner friends, to buy a car way out of our price range. Clothing and accessories are very important here in the Thai culture. There are exceptions – it doesn’t matter what the children wear for a quick trip to town – but what you wear seems to be a key expression of class and beauty for middle class Thais.

I can’t very well explain to them that most of the pretty things that sit around my house are gifts from friends and family. It’s silly to explain that I spent very little on doilies and tablecloths because I found them at second hand stores. Silly to say that most of the children’s toys were gifts from grandparents and nearly all of their books are second hand as well. It doesn’t really change appearances.

Throwing a small blue table cloth over an ugly pressboard coffee table comes as naturally as breathing to me.  Arranging pretty around my home is necessity. I live here, every day. I must have beauty or I die inside as the chaos of raising children and homeschooling and being pregnant overtakes me. I was raised in a beautiful home. I was taught that beauty is part of homemaking, and that there is virtue and wholesomeness in it. I was taught that I am the keeper of my home. That I am responsible to be here, and care for the needs of my family, physically, and spiritually, and however else. This is my spot. There is joy in it—when I can make pretty happen as part of that.

Were we Thai citizens, I suppose a good chunk of money would to to sending our two children to school. I’d be busy with work somewhere—so would Dru. I’d be gone all day, reaching home when the kiddos do. We’d own a large TV. We’d be making payments on two nice vehicles and a motorbike. I would possibly not wear second hand clothing…I don’t know, I just don’t know…

I also know that there are ways Thai people express beauty that I don’t even notice. I think they probably take their beauty to their workplace, where they spend much of their day. I’ll never appreciate the beauty of an intricate spirit house, but I know that is another expression. They create beautiful coffee shops and elaborate flower arrangements.

But what I want to stand up and shout to everyone is that I live the way I do because it comes as naturally to me as breathing. It’s not hard or expensive—it’s natural. I was merely taught to spend my time and my money in different ways. Right?

So, the magazine, the eye candy, the hope and happy I feel rising up within me as creativity strikes me, is suddenly squelched. And what breathed for a moment, ceased again, waiting for its moment…another day…maybe…Because for today, my expression of beauty seems to be a poor testimony.

Yet I know that I can no more quit creating beauty in my home than I can quit breathing. Deeply entrenched within me is the understanding that beauty and safety walk hand and hand. Somewhere inside I know that beauty is wholesome, and families thrive best when they are surrounded by it.

And I wonder if what isn’t hardest for me to accept in this life that I live right now, is that nearly everything I do, all the choices we make as a family, the very fact that I homeschool my children and even have 3, and soon 4 of them, is extremely counter-cultural here. Unheard of. And they don’t fail to let me know it—to my face. And why it’s okay to let me know so openly what they think, is one cultural thing I still haven’tn gotten used to, even in the seven plus years I’ve been here. I’m either considered very talented or downright foolish.  Regardless of what they actually say, I feel disapproval on some level. That’s not a pressure I’m handling very well, I’m afraid. 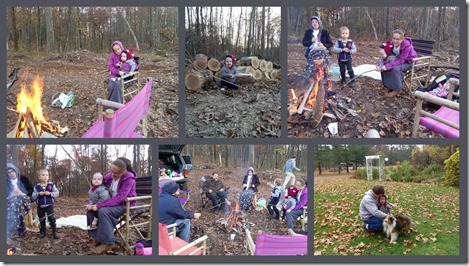 Written New Year’s Eve, but not posted until now because of technical difficulties
Merry Christmas and Happy New Year!
And since I haven’t blogged since October, here’s a bit of catch up.
I did go visit the States with my baby, Rennie, in late October, coming  back in early November. It was a lovely time. Yes, I dreadfully missed my man and children. However, we didn’t say, “Never again!” We said, “we’ll wait awhile before we do that again. “I was determined not to do too much or pack my time with appointments and just spend some time with my family then I was up North to see Dru’s family for a couple days. All happy times that flew by quickly.
My sister, Amy, made the last minute decision to come with me back to Thailand for about five weeks. Sadly, we weren’t able to “show her a good time” so to speak like we would have liked to. We moved (again) over this time and so there was a lot of packing and cleaning that she got in for instead. I did manage to take her to the market and we went up the falls and to the malls with her as well. But, well, mostly she worked like the maid. I hope she’ll come back again at a time that isn’t so busy for us. I realized that the stomach flu I was fighting as I was trying to pack to come back to Thailand was a bit odd. It dawned on me about 12 hours before boarding my plane that perhaps I was pregnant. Such is the case, so all the drama of the last several months has been even more complicated as I struggle with a foggy brain and morning sickness. Seriously, I don’t know which is worse. Thankfully, I think I am coming out of that. Here would be the time to say that Bob and Yai were baptized several weeks after I returned from the States. Praise the Lord! We’re looking forward to working with them in church planting here in the future.

Christmas parties came and went this year, very happily. I have to learn not to stress about hosting and things being “just as they are” with having just moved and all. I do better as soon as the first guests arrive and I can stop pretending that I’m actually going to manage getting things perfect before people get here.


The Sunday before Christmas we had a Christmas party/church meeting, with our Thai people. Yai’s sister and her daughter showed so we got to share the Christmas story with them.  And then we ate…and ate…and ate…Yai’s story of her friend who came from some European country where it was not perceivable to eat meals unless food is served in proper courses seemed especially unfortunate as we feasted over papaya salad, squid (or is it octopus, or maybe cuttle fish?) cookies, candy, popcorn, noodles, sticky rice and chicken, oranges and everything else—all in one happy array over the dinning room table. 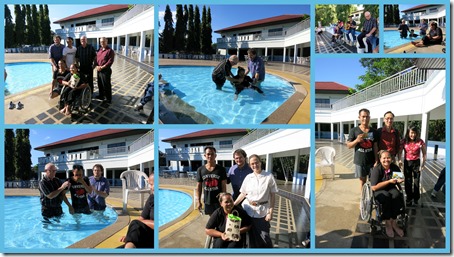 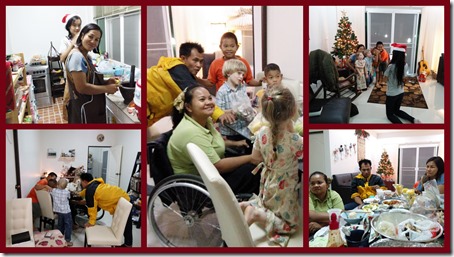 Christmas Day evening was also a lovely time with our “farang” friends crowded into our tiny new home, some for supper and others came later to feast on Christmas goodies, hot chocolate, and coffee. Mae Wahn came too, and it was nice to have her and thankfully, these days when our house is full of farangs, most of us know enough Thai to include her in the fun and conversation. The only pictures that I’m aware of for sure that got taken were a few taken by our French Mennonite guest, a co-teacher of Dru’s—but they were only a few. If anybody has pictures of that evening I’d love to have them. Other guests were Lavan and Beth and their little girl, Lanus and Aggie and family, Amy, Kimberly, Leon, and Chad and Jenny Graber’s family. Happy times. 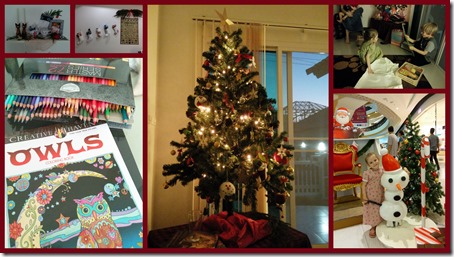 Since that evening our family hash mostly been crashing. Playing. And crashing some more. We discovered a “new” mountain on our side of town. We can get there without going all across town through much traffic. This is good. We found a cave. This was very scary and terrifying for the pregnant mother who is scared of heights. We had to ascend many steps to get to the mouth of the cave, then descend many steep and uneven steps into the heart of the mountain. Jube was totally thrilled. Havilah and I held hands and assured each other that we were scared many times until we were finally out. Once all the steps were descended, it wasn’t so bad, except for the dread of climbing them again. Once down there, there was a small monkey there who begged for food. He was the nicest thing about the cave. Otherwise it was rather like an overgrown unfinished basement, what with all those steps and all. But we made it, Havilah and I, we did! 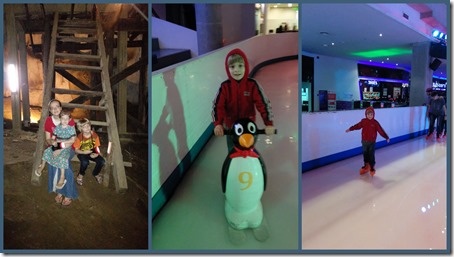 Then that evening I took Jube skating. He did a good job. I was a bit tipsy after not having been on skates since before I was married. And all that were available to rent were hockey skates. Dru, Havilah, and Rennie, occupied themselves elsewhere in the mall until we were finished. I felt bad at first that Havilah wasn’t able to go, but in the end it was better—I don’t think she’d have lasted long and training one child while feeling a bit uncertain myself was as much as I could handle. She seemed to have a nice time with her Daddy, too.
Here’s hoping you all had a Merry Christmas and are anticipating a Happy New Year. God bless!
Posted by Lisl at 10:30 PM No comments: Links to this post