Did you know that when you roast peanuts, they crackle and pop for a while as they cool down? My children are intrigued. 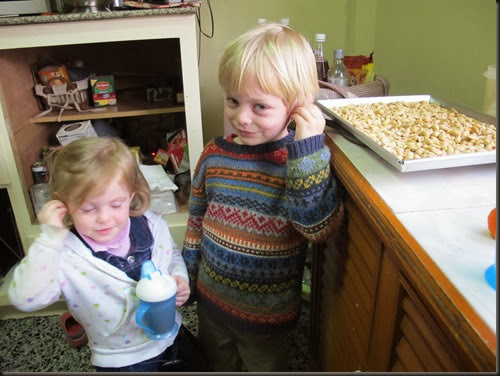 “But there’s nothing happening inside of them when you open them!” Jube explains to Havilah.
Yesterday Jube had a friend over all afternoon and into the evening. She was with her parents who were working on laying tile for our neighbor lady. 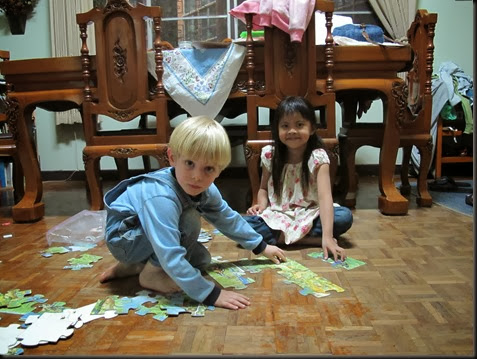 By the time she had to go home around seven o’clock they had puzzles, games, and toys all over the dinning room floor. But they sure had fun!
Posted by Lisl at 12:53 PM No comments: Links to this post 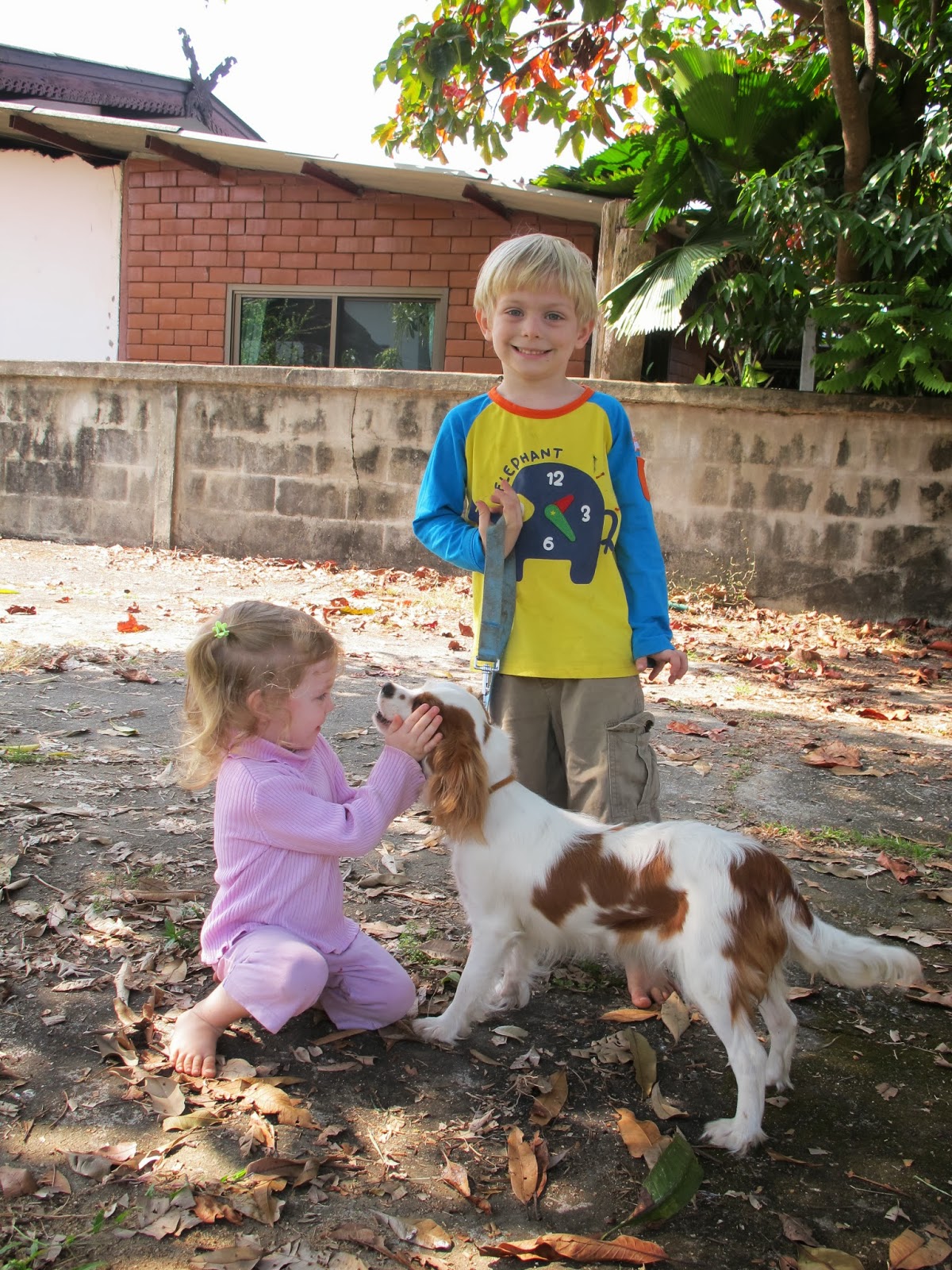 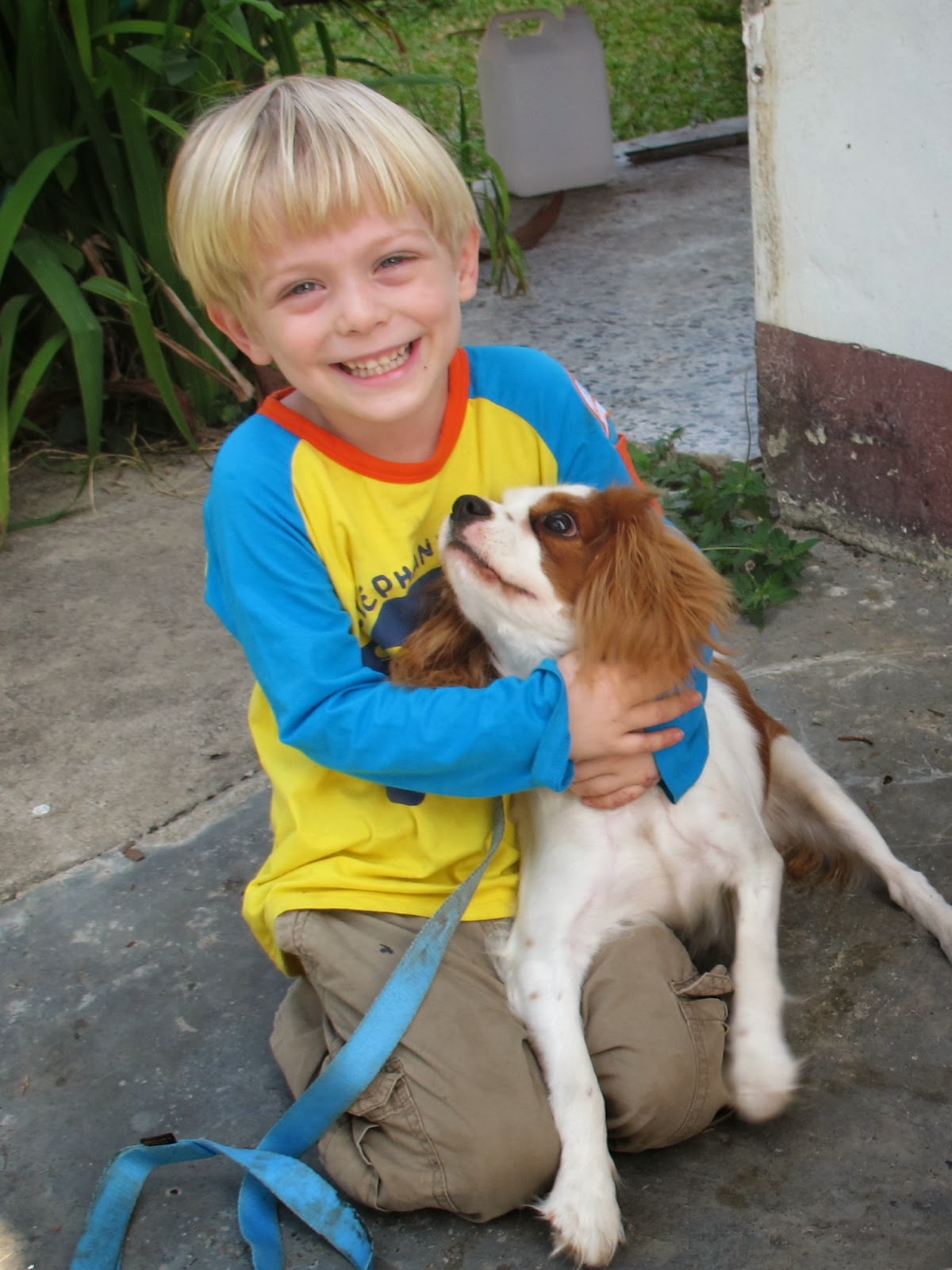 Right now the children are out playing with Lucy. Lucy, if I haven’t said already, is a dog belonging to friends who are unable to keep her right now. We will have to give her back as soon as they are able to move into their next residence—one more suitable to pets. For now, the children are falling in love with Lucy and I pointed out to Dru the other day that Jube hasn’t played with snails since Lucy came. Havilah, though terrified for the first week, is no longer scared at all and goes out on her own to play with Lucy. Both children play outside a lot more these days. Once we get back from the States in about 8 to 10 months, we’ll have to get our own pet. Not sure what that will be because we aren’t sure where we’ll be living at that point.

I don’t relish the thought of moving. We love it here. I’ve come to peace again about living in an old house. The hardwood flooring does come up in places, the bathrooms are hard to clean, and the windows old and cantankerous. But this has been home—the only home either one of my children remember. However, there are ministry reasons for which we may be moving back over to the other side of town. If we do move, I hope for a much smaller house, easy to clean, and easier maintenance. Perhaps that’s only because I’m lazy. What I’m telling myself and other people though is that I’d like  smaller house because I want to be able to put more time in to ministry and language study. Homeschooling my babies in earnest will be starting soon. Jube needs to learn to read. Jube needs to study Thai. Less house upkeep with give more time for these things.

Both of my children can speak and understand some Thai. The communicate well enough with Mae Wahn. However, it’s not where it should be and I’m a little worried about our sabbatical time in the States. How much will they lose? I’ve decided that I’m going to start digging out Thai movies for them. Movies that we’ve watched in English and enjoy as a family. Have them watch these in Thai. This will be good especially for Jube. We can do this even in Wisconsin, if I can be on the ball and remember to pack what we’ve got. Jube is going to fuss some, he’d rather watch in English, but it’s okay. I also want to prep some kind of flash cards and games before we leave, so I have something to take back with us to study. I really want us all to be speaking fluent Thai one day. Myself included. This is home. These are our people. This is our language.

Hubby dear is up to his nose in homework. I’m so thankful for a good man who is still present with us when he has to work so hard. He’s staying on top just barely and he really is still happy. So, although snowed under, he’s weathering the blizzard well, so we all are. I am so proud of him. Keep him in your prayers. He’s got about six weeks of hard work ahead of him. Then we will all praise the Lord that most of it’s over and that we lived through it. Pray specifically for those 2 big research projects.

Now my children are inside and so I’m going to get up and get some work done. Have a happy day.

I tried to post a while ago. Dru was helping me with pictures. We both left the computer for something different and when we came back everything was gone. That was rather disheartening. Now I have mustered the courage to begin again. 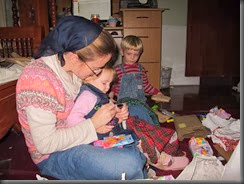 Does this picture show up twisted slightly? I thought so. Live Writer has been doing that to me lately some. This is the only picture we have of opening family presents. 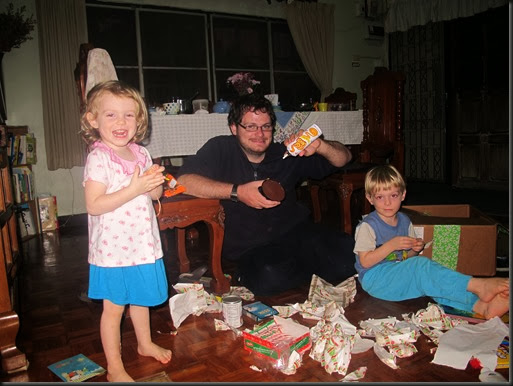 Gifts from Arlin’s. So fun. 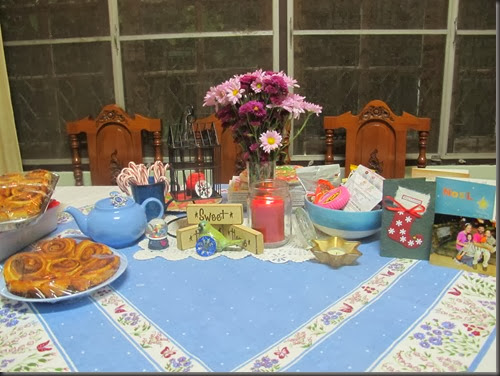 My table on the day after Christmas. 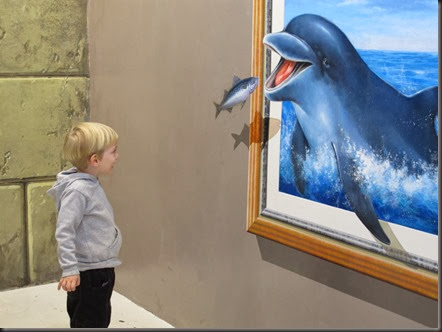 We visited an Art Museum on New Year’s Day. The night before we’d had a lovely evening with our Thai church. Since it was New Year’s, Mae Wahn spent the night rather than brave the dangerous roads to go home. Driving around New Year’s can be hazardous in this city. The next morning she had received word that a relative had been killed in a car accident and she needed to attend the funeral.

However, we spent the morning lingering over our coffee, playing with the dog, and chatting. Before she left she urged us to go do something fun. So we went to the Art Museum. It was lots of fun. We wished that Jube would have been in a more cooperative mood for pictures, but we still managed to get a few of him. Havilah got right into the spirit of things. 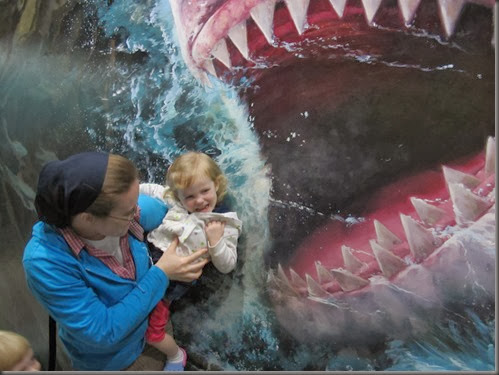 In the end, the shark didn’t eat her. 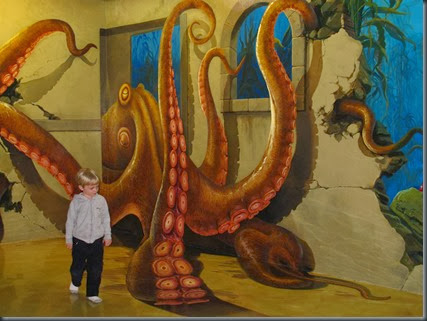 And the octopus didn’t eat him either. 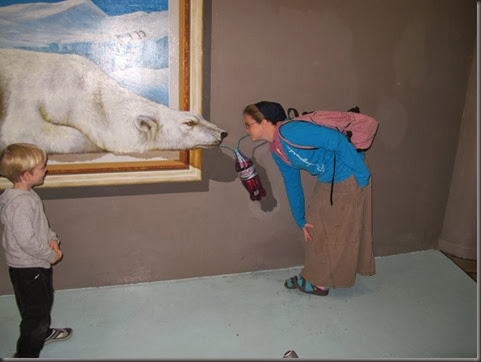 Share a soda with a polar bear. Just because. 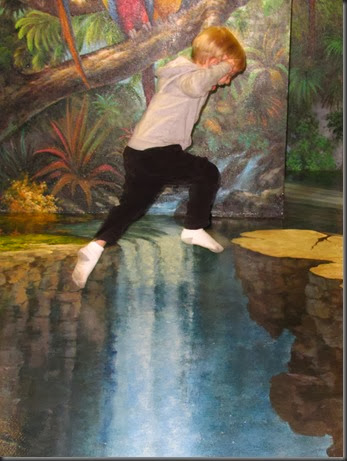 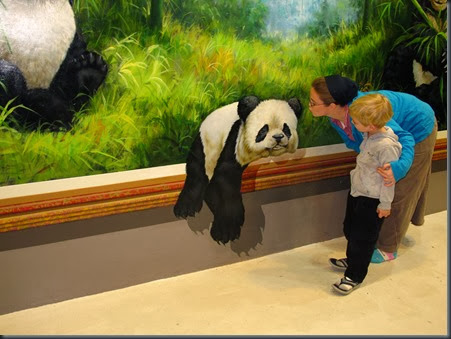 The proper way to kiss a panda bear, demonstrated here by me for Jube. 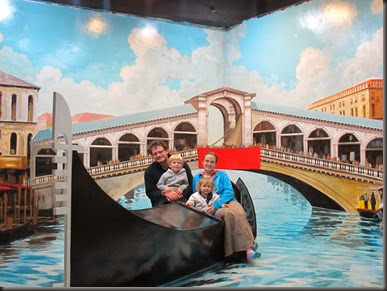 Ride on a boat. Havilah and I execute a dangerous crossing. 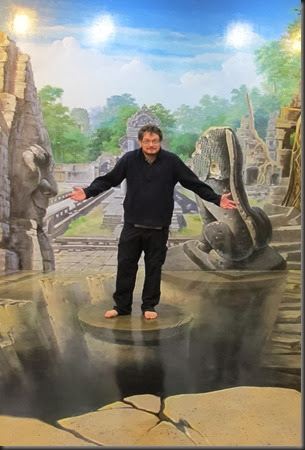 Right in the middle of things, where I try to keep him. 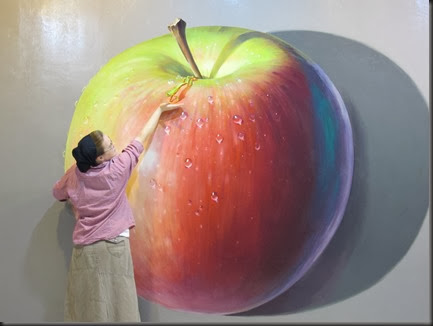 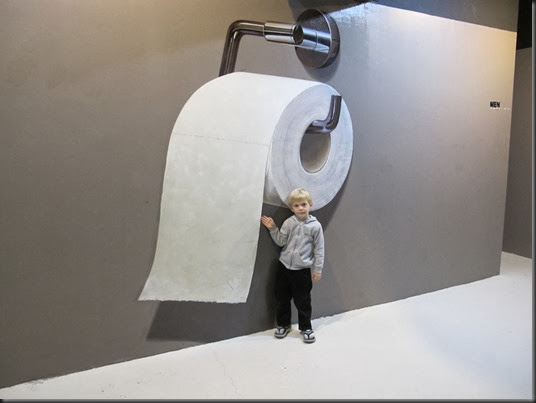 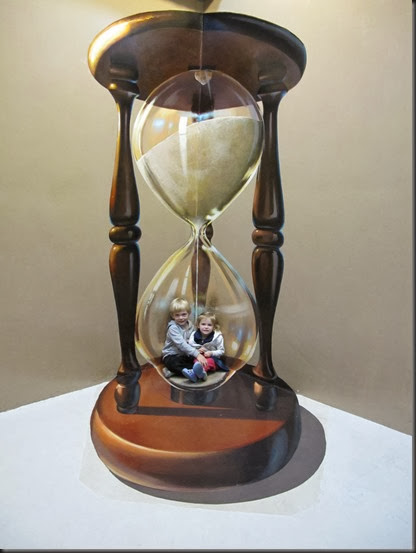 This was probably the very best one. Stuck in an hour glass. 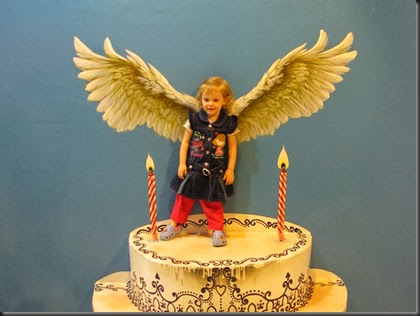 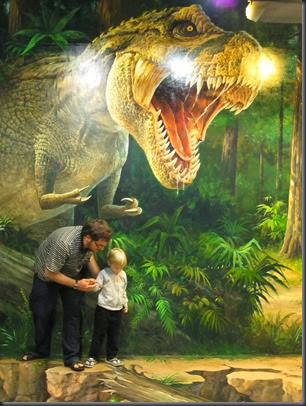 Beware the dinosaur behind you. I was a little frustrated with the lighting on this picture…not ver convincing. 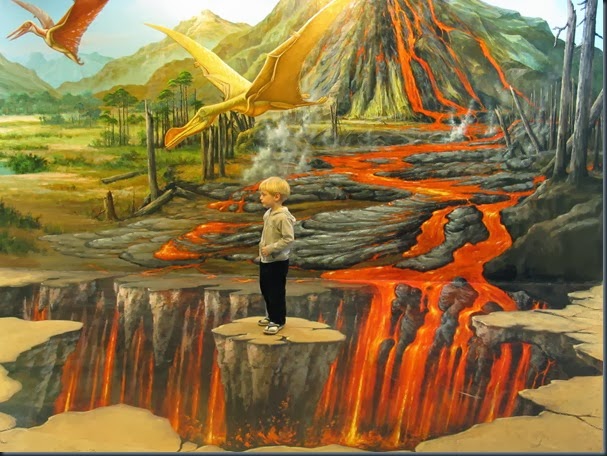 Jube was fascinated by this room full of dinosaurs, however, still in no mood to pose. 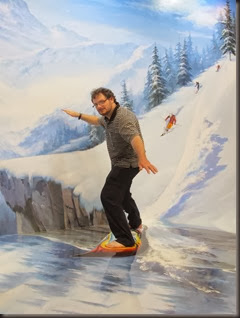 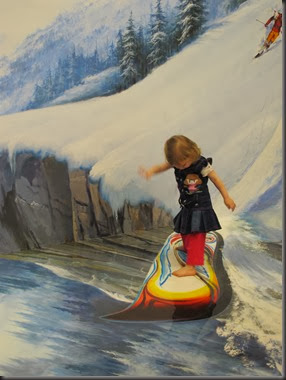 And then we were ready to go, only to see that Havilah also wanted to snowboard for a bit.

And this is the end of this quick photo post. Have a Happy New Year!