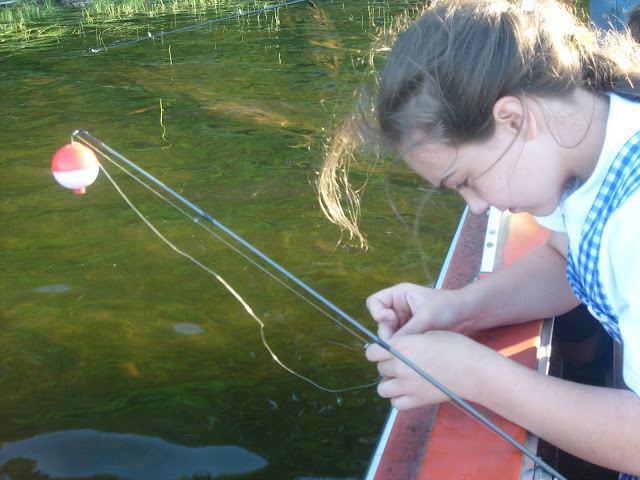 I dreamed about fishing last night. I dreamed I kept snagging a dead, limp, Thai variety of a fish. It was disappointing and unrewarding. But when I woke up, I kept thinking about fishing with my family. I haven't gone fishing for two years.

There was a summer when Dad bought a big orange-red boat. We discovered fishing. It was one of our last summers together as family before us children turned into adults and went our separate ways across the face of the globe. It was special.

We fit the whole family on that tub of a boat. Not uncomfortably, but not exactly with the greatest ease, either. There were nine of us. The only difficulty was the lack of "hole frontage" from the edge of the boat at times when the boat was inconveniently situated so that one side of it was away from the popular hole. At times like that you'd put a lure on and wishfully cast into the middle of the lake--dreaming of catching the biggest fish of the year.

Either all the fish in Windago were deaf or it isn't true that you have to be quiet when fishing. We had several evenings where the pan fish were biting well enough to bring in fifty fish fast, as though the noise was a lure. After an hour they'd slow down and just as the sun went down the rock bass would start biting. We'd go home late with our bait supply wiped out and our cooler full.

Taking supper with us lost its charm for those who thought worm entrails in the potato salad weren't conducive to a good dining experience. More often then not, we'd eat before we hit the lake.

We came home late and the men (and sometimes mom too) would clean the fish by the light of the spotlight on Dad's service truck, out behind the house where the hose was. There is probably a whole mine of fish scales back there by now.

I remember one night Jenny opted out and stayed home. I didn't understand that and I neither do I understand Frank's reading a book on board. (I believe Frank had a certain distaste for worms--an overall squeamishness about touching a divided worm, trying to get the frantically squirming thing to stay firmly on the hook.) There were a couple nights that mom read out loud to those of us who were fishing. That was always fun until the light got too dim.

There are a few rules when fishing with Grabers. Don't cross other people's line with yours. To be more specific, don't cross Dad's.  Don't get caught in the reeds, weeds, or trees--not even the perch actually perch in the trees. As time went on, we actually became more long-suffering with each other for making this blunder. Don't catch people. I did it once. My hook was caught on something, so I just tugged at it to get it come until I discovered that it was firmly embedded in Amy's jaw line. Mom got light headed. Amy was patient about it though. After waiting for an hour in the ER, the doctor had to push the hook around the loop, snip the barb off, and then pull it back. There has to be a cleaner injury than having a wormy hook in your skin. Sorry, Amy.

Dad might put flopping fish down your neck if he wanted to. He did it to Clark once, if I recall properly. I think it was a "baby" fish who needed more life experience or something. Poor thing.

Dru went fishing for his wife's sake. He confessed to me before we were married that he found fishing to be the epitome of boring. He likes it now. I think. He married into the Graber family. It's kind of a prerequisite.

I once asked Dad why we don't fish as much anymore. He said something about a credit card. Not that I'd ask him to go into debt on the credit card--but the fun we had wasn't really something even a credit card could pay for. It was just plain old family fun and we loved it.

So when I get back to the states, I want to go fishing again. Please. 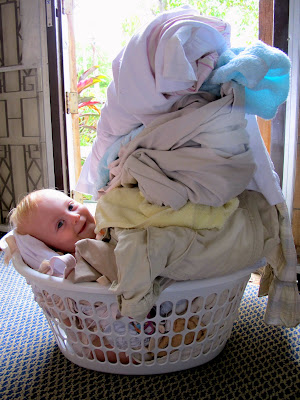 It's Hot In This Country!

When I get big I'm going to be a wonder woman. Like I'm going to scrapbook. And clean my house. And do laundry. And paint. And make three meals. All in one day. Right now what I really want to do is go take a nap. Wonder women don't take naps do they? Sigh.

Okay, so today I was going to run around with my man than come home and get the rest of the laundry washed, dried, ironed, folded and put away. I was supposed to go to a meeting with Dru right now. I'm hosting a party at my house this afternoon. Dru's buying food for that. After the party, there's prayer meeting--but to be honest, I wasn't planning on going to that. (Actually there is prayer meeting every night for the next ten nights in a row.)

But my day isn't happening like that at all. I did run around with my man this morning, but the car caused problems on the way home so I was out in the heat and by the time we finally made it home, I needed to get my baby to sleep. Dru's at the meeting himself. I haven't started my laundry. I simply can't bear the thought of leaving this A/C. So I'll try to get Dru's pants on the line before I go to bed tonight. I'm not thinking about the party. It's after 2:30 pm and really I'm not sure when the party's starting. Five maybe? My house will be as it is pretty much.

It's been around 100 F out there the last little while. No, long while; about a week and a half or so. Even the Thai people find it only just bearable. I've noticed this year that right now everyone is praying for good health. The weather wears on the health and people get sick. Dru's been fighting it. It affects him worse than me--maybe because I'm lazy and refuse to push myself.

You know, I don't feel very well right now. I think I shall go take a nap. I wonder what condition Dru will be in when he gets back.

About being a wonder woman again. Somehow, either I have to learn how to be more self disciplined, or I'm going to have be content with where I'm at now with life. It's not like things are actually falling down around my ears. I'm keeping up. Rolling with the punches. But I have projects all over that need doing. When the rains start...then I'll be a wonder woman. Right now, I'm going to go take a nap.

I guess all of that sounded rather whiny. Funny, that's another thing about this heat. All of the women I've talked to about it agree with me that they struggle with keeping a good attitude in this season. Makes you snappy and grouchy. Through prayer and reading my Bible, having a good man, and simply deciding to be happy--I'm okay. I really do have many, many amazing blessings. My next post will be about some blessings.