This past Sunday Dru began our Easter by playing this song: https://youtu.be/9a2Va94Tldc

That morning I wrote portions of it on the board. Here’s a picture that could have been taken better, but I didn’t. 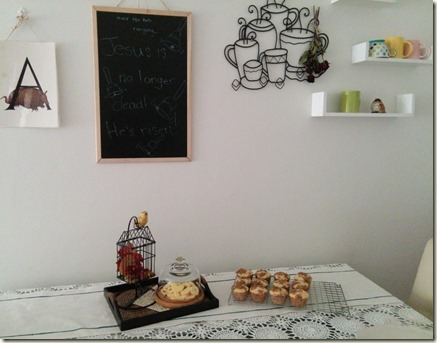 The children came out of their room and wanted to know what bells had to do with Easter. So Dru played the song for them. That led to a discussion about what it means to be “born again.”

For Jube it’s been thought provoking, leading to a discussion with his dad about it. “I want to be born again,” he said. We came to realize that it’s time to be discipling him more purposefully towards this commitment. We don’t want to keep the little children from Jesus, so to speak, but we want to lead him to Jesus and this big  commitment. He needs to better understand what it means to be a disciple of Jesus and what baptism is all about. Meanwhile, he was relieved to hear that Jesus could forgive his sins even today.

Havilah was a little blown away with the idea that we’re all sinners. We’re Christians, right? However, although she didn’t understand really what it mean to be born again, she did understand that that would somehow fix it and so it was okay in her little heart. Havilah is the little bird that keeps the Easter bells ringing for us here.

The words and bells are still on the board. Whenever she happens to notice them through out the day, she sings, “Hear the bells ringing…” It’s her favorite song right now. So we’re reminded daily that Jesus is risen and we can be born again.

Posted by Lisl at 11:00 PM No comments: Links to this post

Mushy brains and the inefficient homemaker

I am not an efficient person. Homemaking in an efficient way doesn’t come naturally for me. I’m talking the really nitty-gritty efficiency stuff.

I was married for six years until I learned to do dishes. I learned that you stand in one place and wash THIS sink full of dishes—completely—before moving on to find more dishes. My inclination had been to wash a few, remember that I had kettles on the stove, move off to get them, wash a few more, than wander to gather more, wasting lots of steps and time in the process. Then it dawned on me why Mom would say, “Bring me dishes to wash,” while we were working on cleaning up after supper. If she could stand there and wash uninterrupted while the dishes came to her, the whole system worked much more quickly.

Learning to pick it up right away—I’m still dreadfully bad at this. So a toy is laying on my bedroom floor. It bothers me all day because it doesn’t belong there but I’m planning to sweep my bedroom floor sometime today. Rather than picking it up because it’s bothering me, I’m apt to walk past it all day long. One toy on my bedroom floor is a little thing, but those little things that lay about the house all day and are bothering me, add up. Soon there is this whole little pile of things in the back of my mind that are really bugging me and I’m feeling bogged down by the condition of my house.

Bathrooms are still kind of a huge ordeal in my mind. Jube is in training about bathroom cleaning and I still feel like I need training of my own. Oh, I know the steps, but for some reason, bathrooms kind of pile up. Mostly it’s a procrastination issue. Perhaps the bottom line is that procrastinators don’t tend towards being efficient?

I don’t remember how my mom’s house looked when I was a young child.  I don’t remember her slumps over baby times. I’m sure she had her slumps. The only slump I remember is over the summer she had her hip replaced. I think I was sixteen. She sat and gave orders from her chair that summer until she could get in for surgery. Actually, she was technically out of commission for a year, I think. But by that time, we kids knew the ropes of general cleaning. Oh, I know that there were corners that bugged her to beat all and we went at them as soon as she was pain-free, out of the woods, and feeling about ten years younger. But the bathrooms got cleaned and the dishes got done and the bread got baked, because Jenny and I knew the ropes. Our young childhood days, I don’t remember so much.

Okay, Jenny knew the ropes. She didn’t even have to learn them. I bumbled along. Work was frustrating to me. But it was at a time when I still didn’t realized that I needed to stop and think about what my hands were doing. How fast was I moving? My work habits were just as terrible in school. It was no fault of my mom’s either. She realized in part what was going on, and tried to work with it—but I think in some ways the idea that I needed to think every step through consciously was an issue she had to think through in an effort to understand. What she did give me though was a good picture of what the goal was. Something to work toward. That’s why I’m able to actually work on my own inefficiency and procrastination.

I’m thinking about all of this because – hopefully – I’m coming out of a slump of my own right now. Being pregnant in the heat always takes its toll on me physically and emotionally. I move slower when I’m pregnant and feel like I waddle in circles all day long. With three children, I find that I get very little done these days. I just found out last week that my hemoglobin level was down below nine a little. It seems that it always drops around this time in the pregnancy. With all of that going on, my efficiency level drops down below a nine too, so to speak.

I was scrolling through my phone pictures for a picture for this post. I found this one. It says like it is. I think that was a bad week. 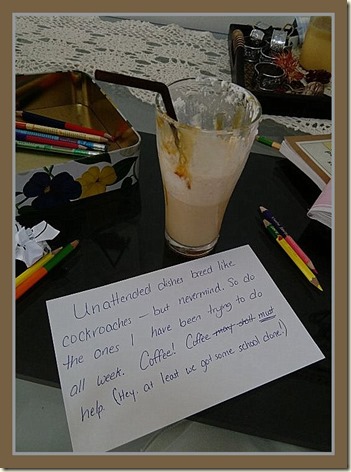 But today I felt like I could tell that all my vitamin-taking has been helping. It wasn’t so hot either. Like ninety-one rather than 100 degrees for a change. The pollution wasn’t quite so bad today. I just felt all around better about life and living it. But I realized as I did dishes tonight that moving slowly had become a habit since my brain has been so dreadfully slow and mushy. I realized, “I can do this faster. I can scrub this glass faster. I can walk from this end of my kitchen to that, faster.” And it’s not like relearning, but it is like having to tell myself, “Kick in gear.”

Heat, pregnancy, and anemic tendencies are the perfect combination for mushy brain syndrome. I hate that fog. I suppose fogs do, and will come, for all of us, for different reasons. There is something to be learned in the middle of those times too. Today though, I’m thankful for a light at the end of the tunnel.