I don’t mind the rain…it’s just that it’s making me lazy. I started my day with intentions to sew and I’ve lost my inspiration after running out of white thread (what a dumb thing to run out of) and then Dru came home and that was the end of it. I should fold some (mostly dry) laundry. Most of the time I don’t miss not having a clothes dryer. Right now it would be nice. And I could do some vacuuming. So I do have stuff to do.

Jube is doing preschool work. Jube style. I need to supervise him better. That child needs some learning to read curriculum. I should order some soon, but I also need to find a ride for it, so that might not happen as soon as it could otherwise. He’s officially potty trained except still wearing pull ups at night. It finally clicked. I had a discussion with him one day about how he was letting this run his life and boss him around. He needed to be the boss and decide when and where it could come out. That seemed to click. I don’t know if I should have started potty training earlier with him or later…but I’m glad it’s over now.

Havilah decided to quit moaning because I won’t let her sit in my lap. She found a train to play with.

Dru is back at school, suffering through his second exam for the day. I say suffering because he woke up this morning and his stomach was in knots. He’s feeling some better now but I suspect he’ll come home and crash. Probably sleep it off, though he threatened to watch a movie with the kids. I hope he relaxes, whatever he does. It’s been a crammed full weekend with writing two term papers and then there are mid terms today. Two more on Friday and then he’s done with midterms. He says he things the semester was top heavy—or in other words, the last half of term won’t be as demanding as far as papers to write, etc. I hope this is true.

This is what my son drew on the sheets in the guest bedroom. I didn’t notice the other whale on one of my favorite pillow cases until later. 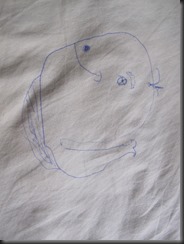 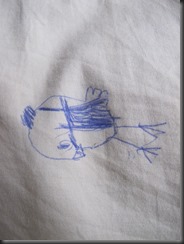 Jube discovered what happens when you put vinegar and baking soda together. 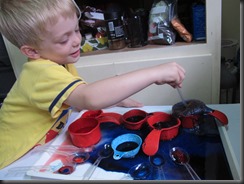 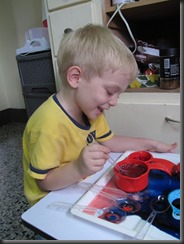 They put a new mall in down the road from us. It is really quite lovely and we’ll try not to spend too much time there. I’m turning into a city kid. 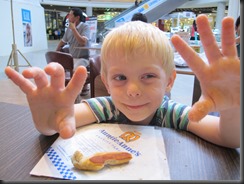 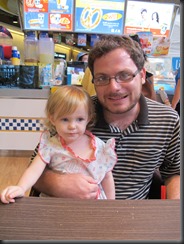 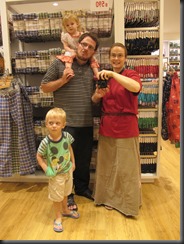 We babysat for Arlin’s the other day. It was so fun. When they came back, we ate supper together. Kayla and I ran to the market for mushrooms and got soaked on the way home. Rain. That’s why she’s wearing my dress. Then we played rook, talked, and laughed, late into the night. (We had the children in bed.) They ended up spending the night…We all had a lovely time. 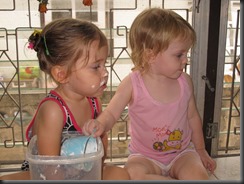 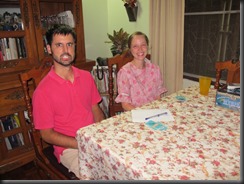 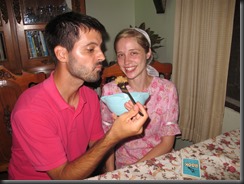 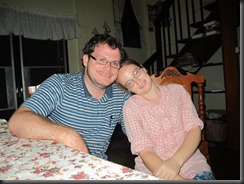 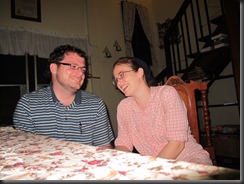 Havilah kissed the frog, several times. But nothing happened—yet. 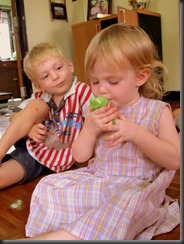 And I just found these pics on my computer. They’re from Rachel Zupke’s camera. You could come back some day Rachel! 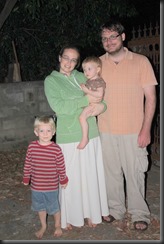 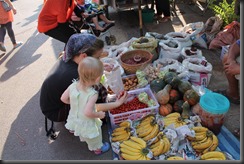 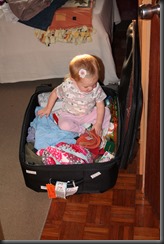 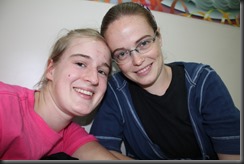 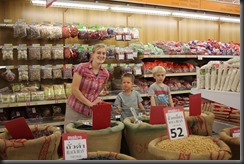 Sorry about the tiny pictures…I’m having Live Writer problems.

On My Feet Again

It’s kind of a long story—and it was all rather uncertain and unsettling for about a week there. Life is better now. Now that we know what was going. I’m going to give an overview of what happened, trying to spare of you of all the gory details.

On Saturday evening, over a week ago now, I realized something was wrong. That evening we went to the hospital where they really could find nothing wrong—only signs of an early pregnancy. They sent us to our private clinic, with hopes that we could get more information there. So Sunday morning found us at Kullapat Clinic. We were told to go home and I was to take it easy. It looked like it could be a healthy 5 weeks pregnancy still. This about drove me nuts. I felt like the doctors were skeptical that I knew my dates, which would have actually put me at 10 weeks.

I was able to contact a nurse from states, Ruth, who lives here in Chiang Mai. From her I realized that there were indeed possibilities that the baby would be still living. At this point Dru and I were thinking up the line of molar pregnancy.

So I stayed in bed, all week long, and made a horrid invalid on some days, just ask Dru. Poor, good man. The IGo ladies helped out a lot with meals, babysitting, and house cleaning. I felt loved and silly all at the same time. I hate feeling stuck in a situation where I can’t depend on myself and am cast at other people’s mercies. I didn’t handle the anxiety of knowing whether or not I was miscarrying or not very well. But every time I got up for a bit longer than I should have, I paid for it. This past Saturday was a terrible day, not in that I was in a lot of pain, but that I was an emotional wreck.

I had an appointment at the clinic with my own doctor for Tuesday night (tonight) but by Monday morning I had just enough encouragement to see if I could get to the end of this before that, that I went ahead and called straight through to my own doctor.We were getting anxious too because of how things were/were not progressing. She set me up to meet her at the hospital with instructions not to eat or drink. I told her I thought I was going to need a D and C and after hearing a few more details, she agreed. (And you know, I think she might have come into the hospital yesterday just for me.)

I was starved and shaky by the time we got there. We met with her in a tiny little room, with the bare necessities for the kind of examination we had to do. She heard my full story when it was all said and done she gave me a D and C right there. I am so glad we were able to do all of that without having to put me under! I was dreading that.

She put me on iron and an antibiotic. Iron, to prevent me from suffering from anemia, and an antibiotic because she was suspicious of infection, and then she gave me instructions to drink lots of water. But the most wonderful thing was that she said I could get up and get to work!

I have a feeling if I had been up and and around, things would have progressed without assistance. But alas, we didn’t know what was up so it was bed rest. The doctor couldn’t tell me if I would have been okay on my own or not.

I can’t decide if it’s just a psychological thing, or if it’s really truly this much of a change, but I feel so much better today. I’m amazed at how much better I feel and how fast my body picked up the pace again. So so thankful!

About the disappointment. We are disappointed. Grieving, not so much, yet anyway. I think it’s because we never heard a heart beat, and the uncertainty as to what was actually there in the first place. My doctor referred to it as a blighted ovum. Basically, everything develops but the embryo. Jenny asked, was there ever a baby there or not? I guess a fertilization happened, so in that sense, yes. If it was something like a molar pregnancy, do you call that a baby? In the end, I don’t know if it matters. It was in God’s hands from the beginning and remains there still. I try not to over analyze it. I wonder if it will hit home harder in January, when the baby was supposed to be born.

I say all of this, but I do not by any means want to make little of the grief so many mothers have gone through in miscarriage. I know that were the circumstances a little different, I would be a mess for months. If I had heard a heartbeat, or if I had endured miscarriage after miscarriage, or getting pregnant was hard for me, I know I’d be crying bitter tears even now. And my bitter tears may be yet to come.

Today I’m thankful for what God saved me from. I could have hemorrhaged. I could have gotten infection. I could…so many things could have gone wrong and my worrier was in gear. Those things are laid to rest now and I’m thankful thankful for all of that. Truly, we don’t know what’s in store around the corner, but for today, I rejoice that I’m the Mom and Wife and Queen of my castle around here again. God is good.

Through it all I’ve been extremely grateful for the husband I have. He took care of me well. There were three things I especially remember from this weekend that made me love him more—if that is possible. The first was that he found a good sermon for me to listen to on Saturday night. We listened to it together after the children were in bed. It was good to refocus after that horrible day. Then, on Sunday I rested at Mae Wahn’s while he and the children were in church. Half way through church he came down and kissed me and made sure I was okay. Then yesterday, and this was just a very little thing but I noticed. He ran out to the car, when we were at the restaurant, to get my pills and then, rather than just tossing the bag at me like he could have, popped the pills out of that nasty individual packaging. I always dread that stuff because sometimes its very hard to get the pill out. I learned later that they actually come out easily—but anyway, it made me happy to know he was caring. He stayed so tuned in all along. Thank you, Babe.

And big thank yous to everyone who cleaned, babysat, and made meals. It made things ever so much more manageable. Thank you!
Posted by Lisl at 3:24 PM 6 comments: Links to this post