Last night I was complimenting someone on her new dress. She said something to the effect of, "I thought it looked like you. It's nice and feminine." Those weren't her exact words but it was something like that. That was a very nice compliment to me I thought. And here I was trying to compliment her. Now how did that happen? 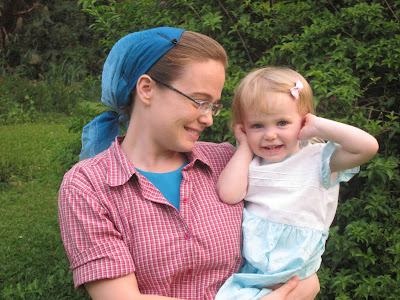 If you want to know what is NOT practical it's those silly shoes that the some women wear to church in sub-zero weather. The dainty little black things with heels. I remember as a teenager stepping carefully out of the vehicle onto hard-packed snow. Then gingerly mincing along until I reached the side walk where I'd make a mental note of how much much ice is on it. Then finally I'd reach the church building to breath a sigh of relief. Then all during church my feet froze because, after all, panty hose aren't as warm as good old socks. Finally I got brave and wore little black boots to church. They were warm and practical but not at all "in".

I like cottons and denims. But I don't like that T-shirt fabric stuff that's all the rage right now. I could say many things about underwear lines and fabric clinging from the waist to the knees, but I won't right now. Yes, I will. No, I guess I won't. I do wear T-shirts around the  house, but not out and about.

I don't like stripes that go around--as a general rule. This my mother taught me. They are prone to make you look fat. Unless you're extremely skinny, or the stripes are "just right." So that's an old fashioned idea by now, I suppose. Okay fine. They'er not pretty. Cute, maybe. But I'm not after that. (I've had way to many people tell me I'm cute, so I'm guessing that that comes naturally for me and I don't need to play it up at all.)

I like my dresses to nearly sweep the floor. My Grandmother used to comment on the length of my dresses and she told me that when the dresses got shorter again, mine would too. But they didn't. Knee length dresses are a wonderment to me. For one thing, I feel exposed when my calves are showing. (Dru tells me I have sexy calves. Isn't that just bold of him?) But then there is that whole thing of the underwear being right around the corner. I always watch closely when I'm around knee length skirts. I like to see if the wearer knows how to sit down in them--and once they're sitting--do they remain modest? Wicked of me, I know--but I have this brazen curiosity. And yes, I've seen flashes of underwear and everything else all the way up. I have to wonder if the poor girl wants to know if she's showing off her stuff, or if she'd rather be blissfully ignorant. I generally let the girl remain ignorant unless my man is around. I may or may not cover for her if it's another man. Please don't ask me to inform you if I ever happen to see your underwear. I might say sharp words about your style of dress that I would like to retract later.

However, I do like a belt over a blouse. I need more belts. :) I think this might be kind of "in" right now but I'm sure I'm doing it all wrong.

You see, I'm just out of fashion at the ripe old age of 26. But I think I'm okay with it. I like my long skirts and my blouses with a belt. I like flowers--in fact, I have too many plaids and stripes in my blouse collection. Not enough flowers.

The truth of the matter is that, although I have these quirks and old fashioned ways, there are many people whom I love dearly and even respect who dress in these "other" ways. There are a few of them who even pull these oddities off in a half way decent  manner--they can even sit modestly to boot! Furthermore, I am quite certain that the way I dress may be of concern to others at times. In fact, after writing this I can think of one dress that I wore quite recently, that bothers me in how it fits. Sigh.

Also, along these lines, I'm always impressed when I find a lady who is fifty or so, and older, and she cares about how she dresses and puts thought and time into it. Granted, these women easily out dress me any day of the week, but I like to think that one day, I'll be able to be put together as well as they do. Wishful thinking probably, but it's nice to dream.

Really, this post is about me, realizing that even though a lot of who I am and what I think is kind of in an upheaval right now, how I dress isn't really bothering me. This post also deserves pictures of what I like and think is nice and all that good stuff, but time is lacking by now so, maybe a follow up post?