It took me a while to wake up this morning. Breakfast was quite late…but then again, that’s usual around here. I sat in front of my fan at the dining room table and contemplated my state of affairs. It was decide between the three of us—me, myself, and I—that although I was very draggy and feeling rather slow, coffee would, in the very least, help me to feel happy. So I made myself an amazing coffee and it was, well, amazing. Soon after, this came to pass: 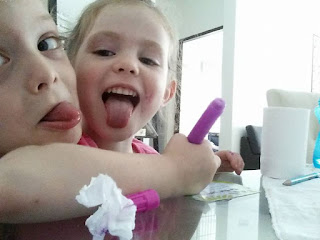 But not the huge pile of dishes in the kitchen.  So after a time I rallied myself and the troops. Jube and Havilah got the laundry together and while Jube was sorting it,  Havilah tried her hand at peeling apples. But her hands were too little in spite of her willing heart.
So Jube took over… and things kind of got carried away from there. In one way I suppose you could say that wisdom would have dictated that I just put the peeled and cut apples in the fridge. However, since he was having such a good time I decided to let him run with it. So Jube made apple pie today. 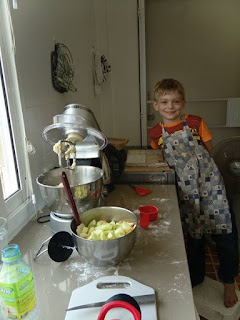 I did core and slice the apples. He read the recipes himself though and did most of the measuring. He learned how to use the scale. I didn’t let him handle the caramel in the saucepan though. (I use Grandma Ople’s recipe. Google it if you’re curious.) We doubled the caramel recipe so I had him think that math through. 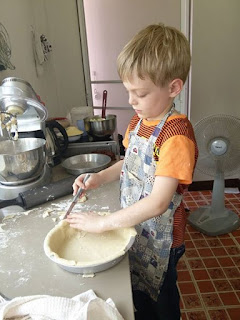 I was disappointed that the pie crust didn’t behave as well as I would have liked, but that’s kind of normal for me. I ended up having to do a lot of the rolling out, but he pieced it into the pie pans then. I did a good part of the first one to show him how, then went out to hang up laundry while he did the second. He was a little worried that the one he pieced all by himself wouldn’t be up to snuff, but it was just fine. 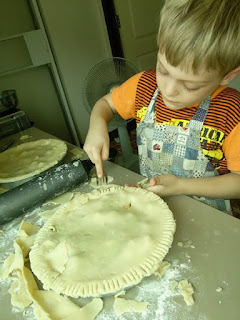 He liked the fork part. I thought about doing something a little more elaborate, but with the way our crust was acting, this was best. 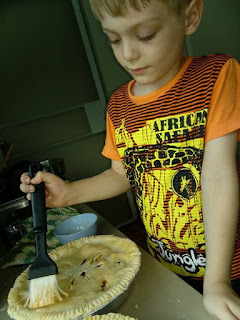 We fled the kitchen once the pies were in the oven. I needed some quality time with the air conditioner by then, but we paused the documentary we were watching to come give the pies an egg brushing and sprinkle some caramel flavored rock sugar on top. 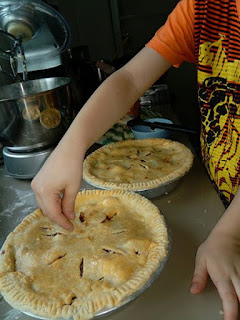 I did end up needing to give them one more egg brushing that Jube doesn’t even know about. But he did a good job and we made happy memories.

He was disappointed that his crimping wasn’t tight enough and some caramel bubbled out the edge on this pie. But seriously…would that keep you from eating it? 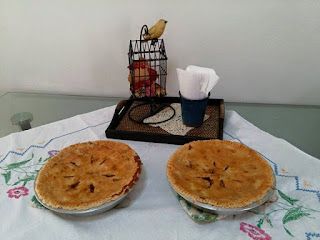 It always amazes me how pretty pies look, as varied as they come, made by master cooks or amateurs alike.
Another happy thing that happened today is that we had water for most of the day. It did go down to a trickle at one point and was off for just a bit this morning…but I did a lovely amount of laundry today. So thankful for that.
And now it’s bedtime. Goodnight.
Posted by Lisl at 11:09 PM